There is another thread that was started way back on The Gnostic Pathway of La Santa Muerte. The accompanying text appears to be missing completely, as the links contained in the thread are broken and nobody has seemed to turn up anything else. The original poster, when perusing other fora, also seems to have disappeared. However, I have been working with La Santissima Muerte for a while and was greatly interested in this concept of gnosis centered upon the Bony Lady. To this end, I endeavor to invigorate conversation on it, with examples of what could be termed UPG (unconfirmed personal gnosis) in the hopes that perhaps others might also take it upon themselves to confirm these operations on their own.

Full disclosure, I practice almost exclusively within the operational framework of American Hoodoo. Therefore, my usage of the saints is limited and usually concerns more veneration rather than intercession. However, my exposure to and work with La Santissima Muerte has nurtured a special relationship that has made her my principle saint almost to the exclusion of all others (this is something I have heard about before--she does not like her space or your attention to be shared with others). This being said, the notions of the underworld, ancestor worship, the crossroads, etc. have all influenced my interest in this idea of gnosis through La Santissima Muerte. Therefore, on with my (scattered, unorganized) thoughts and proposals for working a Gnostic pathway through La Santissima Muerte!

Firstly, I am working on a series of writeups to develop an operational framework for a gnosis mortuorum, or chthonic gnosis that will (hopefully) outline and explore this entire concept in full. Until then, there are a few premises upon which this framework is based. The first is that if we accept the definition of the divine as has been handed down through the 2,000 year old filter of Christian Platonic Idealism, the divine is ultimately unknowable in its fullness by human beings. This is simply a fact of philosophical perception unless one was raised and lived in a culture completely divorced from European Christianity. Because this is a Gnostic subforum and we are talking about La Santissima Muerte, I'm assuming this cultural alienation is not the case. To continue, we can approach as close as we can, and we can operate along any pathway we like (the Tree of Life, Kundalini, transcendentalism, etc.), but we will only ever approach an approximation of the divine in this life. Because our bodies are material, our soul/spirit/anima vitae/etc. is ultimately linked to it until the moment of our physical death and this ideal abstraction that is the divine is even more so an approximation and less a reality to be reached. It follows that the ascent inherently implied in the discipline of astral projection is self-limiting. Therefore, to incorporate the material core and spiritual cores of our being to know the divine as closely and intimately as possible, we must descend before ascending (if ascension is necessary or desirable at all).

The second premise builds upon this by taking two principle assumptions and linking them: the first being that the underworld is representative of both the Greco-Roman and Temple-period Judaic conceptions of the underworld as a resting place for the "shades" of the dead (a shade, here, being a pre-Christian conception of what we could otherwise call the modern concept of a "soul") and demons/earthly divinities. The second assumption, linked to the first, is that the underworld is also the abode for those deities/saints/divinities/loa that, in Hoodoo, Voudou, and other Southern American traditions, are viewed as being equitable to modern neo-pagan luciferian spirits and adversarial spiritualities that a) do not care for dogma, b) are viewed as tricksters, c) are viewed as chthonic in general, or d) viewed as any combination of the above. Linking these two assumptions creates a cosmology that reinvigorates a very pre-Christian and early-Christian view of the underworld in general and creates a mental destination for the aforementioned descent.

The third premise is the operation of the descent itself--a form of initiation into a modern chthonic mystery. By undergoing a ritually symbolic material "death and burial", we are sacramentally offering our material being to the earth, and symbolically releasing the bond of the spiritual being to the material being. The theory here is to fully immerse the spirit in the realm/current/energy of death itself, commune with La Santissima Muerte directly as the closest thing Christianity has to a chthonic divinity, and release our full potential as practitioners of the occult.

All this being said, to reference myself, this may render the astral "ascension" undesirable, since, in theory, this operation would create within the practitioner an ongoing and semi-permanent link to spiritual being at all times. In essence, one's spiritual being would be elevated above the limits of one's material being. This has the joint benefits of pursuing the spiritual alchemy of classical occultism as well as recognizing the gnostic inferiority of the material while simultaneously doing something about said inferiority.

I have not yet performed the operation, as its exact mechanics are still being developed/divined (there is a combination of purposeful construction and divination going on in regards to the creation of the operation). However, linking it to the Tree of Life, so far the operation has focused on the number 10, utilizes a unicursive decigram and a crossroads, and the ritualistic use of the Latin Requiem not only to link it to the traditional Latin Mass for the Dead but also to invoke the themes of death and resurrection.

Any and all input, questions, thoughts, musings, etc. are welcome. As I said, I am starting this thread to invigorate a discussion on the topic. If there is no interest, I will simply keep people informed of what develops.
Top 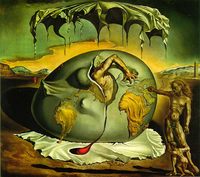 Re: Santissima Muerte and Gnosis

Sorry to bother you, but I'm fairly new to the occult in general, and gnosis in particular, so could you explain to me what La Santísima Muerte is in a bit more accessible language? How does one venerate her? What does that entail? Is she a deity/deities? Is she a spirit, a symbol, a metaphor, an avatar, a dream-image, or all of that? Who "believes" in La Santísima Muerte? Is it only a Christian Gnostic sort of thing, or do other spiritual people (Neopagans, Druids, Shamans, etc.) pay her respects? Maybe it's because I read this late last night, but I'm not feeling like any of it made sense to me.

My deepest apologies, and thank you for such a well thought out introduction! (Can anybody find that book?)

"Paradox and contradiction are mysteries of the soul. The weird, the uncanny are sources of knowledge. To know the self. . . one must open the heart wide and search every part. This requires facing the unacceptable, the perverse, the strange, even the sick. Without this critical embrace of metaphysical complexity the soul cannot be understood." -bell hooks
Top
Post Reply
2 posts • Page 1 of 1