For our archives, may they live long and prosper!
I seem to have almost natural affinity for darker places.. But then again, for various reasons, it's so much easier to publicly tell stories about darker and sinister ones, rather than the lighter and more innocent domains/planes. Anyone would probably have their own different take on what it is and how it looks like, so this is more like a short intro on certain plane of existence (or non-existence) that I conveniently call "the Void".

Like oceans of our own physical world seem to have certain boundary for life, mostly only as deep as the light can reach. And going deeper almost nothing can live, almost. So does the universe, our greater existence, a spiritual/astral existence, have certain layer, which is devoid of light. But it's not exactly "a place" per se, because words like "place" or "realm" would indicate certain boundaries, while Void is boundless and eternal, or so it seems. If everything would be somehow deleted of our universe, all the matter, all the light and energy, physical and non physical, the very last thing to remain would be that - the Void. And when the last lights go out in our universe many trillion years later, and then many trillion years when all atoms in our physical universe evaporate, and all the energy in other dimensions fades, the Void will be feasting on the corpse of existence for the rest of eternity.
Void is the bottom layer, that collects all that was lost and forgotten. I personally believe all road and paths eventually lead to void. But while very bottom of the oceans is quite a distance away, it's not exactly the same with the void, it's always very near, at least for those of us that dwell a bit higher, but our existence for those who find them selves stuck in the void - is almost infinitely far, almost unreachable in most cases.
While Void, to the most part, should be place of non-existence, life always find a way. There is certainly "life" there, even if often bizarre by our standards, sometimes even grotesque. Life that learned to live on scrappiest scarps, and life that have not ever known concepts karma, morals, good or evil, or even if they known any of those, they long forgotten everything. It's the law of the jungle in it's purest, most raw form.
There is no light there, yet once your eyes adjust to that thick blackness you might start to different shades of the black. But you might see some specks of light in a distance, don't be deceived, all the light there is false. Almost like all the light in deepest parts of our oceans is just bioluminescence coming from predators, so in the void it's better to keep your distance from all the "light" there.

And shining your own light is not a great idea either. It will attract a lot of attention of all kinds.
And then void have some other "features". Once you enter Void, Void enters you, and all that was hidden and suppressed within, tend to come out. All your fears, shames and insecurities, all your demons, Void will give form and shape to it all. It will manifest all your nightmares on the spot in a very high resolution and more. So it would be highly recommended to do a lot of homework on self, for all adventurers planning journey in to Void, beforehand.
Despite the name "Void" and general notion of "non existence", void does have strange and bizarre pockets of existence here and there. But "life" in those usually take very "unusual" forms, there often "creatures" that neither dead nor alive by any known definition. Some of it even looks like something or someone tried to create life from just distorted fragments of memory of what life should look like. "Silent Hill" comes to mind, not 100% accurate but they got pretty close to the general vibe. 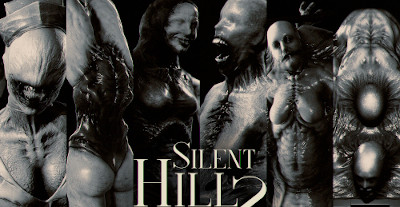 But those usually are just a "critters" of sorts. Truly bothersome entities don't bother with ascetics at all, and instead take on the most efficient form for their environment, those usually glide through the darkness of void on their many tentacles like whales.

And yet, despite all that, void is great place for many things. In some cases it's best place to go, if one is looking for some more exotic ingredients for own magic works and experiments. But as the saying goes "Once in Rome, do as Romans do", same goes for the void, do your best to blend in with the crowd, if you found your self in such place intentionally or accidentally.
May you have exciting adventures and be back with nothing missing, nor with anything extra!

Pralaya (devanāgarī: प्रलय) is a Sanskrit word that means "dissolution" or "melting away" ... In Hinduism, it refers to a period where the universe is in a state of non-existence, which happens when the three gunas or qualities of matter are in perfect balance.
https://theosophy.wiki/en/Pralaya

Thus there is thought to be a cyclical process whereby Existence vanishes along with Life.

Amor wrote: ↑Mon Apr 12, 2021 3:21 am Pralaya (devanāgarī: प्रलय) is a Sanskrit word that means "dissolution" or "melting away" ... In Hinduism, it refers to a period where the universe is in a state of non-existence, which happens when the three gunas or qualities of matter are in perfect balance.
https://theosophy.wiki/en/Pralaya

Thus there is thought to be a cyclical process whereby Existence vanishes along with Life.

Could be, in theory, although I this very moment I don't quite see how everything can or would restart again, once gone. But on the other hand, known existence is not likely to go away for many trillions of years, so the whole thing is a bit too far away to be a concern. Although it might become at some point, but I'm guessing by then me and descendants of human race will be "living" inside some travelling black hole or something similar, and the entire our perception of reality and realities will be more equipped to solve those questions. I trust in progress.