Astral kaleidoscope: Afternoon with a Titan

Astral kaleidoscope: Afternoon with a Titan

It's quiet again, but I don't really have anything to add to those handful of discussions that were going over the past few weeks. So I'll just drop some random stories, every now and then.
While I do tend to wander more around darker places, figuratively or literally. Doesn't mean I don't like lighter planes and places. I'm just usually don't feel like talking about those as much. Often those lands aren't as well equipped to deal with all kinds of malice which may befall upon them once they become known. On the other hand, this one, I feel is well equipped. But exact details I will still keep to my self, just in case.

Afternoon with a Titan
A while ago I was very interested in researching egregores, their connections to the physical plane. Still am, but I back then I was doing it much more actively. Actively trying to find hidden connections and where those lead, whenever I would sense some "connection", behind some story, myth, art, cultural idol, etc. Be it historical or from more modern times.
One time I came across some "idol" and I felt a presence, but couldn't tell where it's coming from, or leading to, or whom. If anything at all. But it was strong enough to draw me in, deep enough for me to eventually take some steps to try and isolated it, strengthen it, and see if this "portal" may lead to any interesting place.
So one day did all the rituals on this side, let it to rest few days, and then set out to see if could reach the end of that "string".
I land on this beautiful and peaceful place. Many small islands scattered in the ocean, not far from each other. And I'm standing on a sandy beach of one of those islands. It's bright and sunny, with waves rolling over the shore. Looks truly like a paradise. Although pretty quiet looking place, I don't see anybody around, at least not at first. But as I turn around looking if I can find any sings of life, I get startled a little by somebody standing right behind me. It's a young lady. Slender, about my height, fairly attractive, but very kind and friendly. She greets me, but so softly, almost as if she's whispering. Which I found quite unusual.
We walking and talking and I start feeling like she's "holding back", not in any bad way, just felt like she's picking words very carefully, consciously, not just words, but the right tone for every word, for every sound, and even every gesture she does, seemed intentionally meant to be as gentle as it can be.
But our conversation was soon interrupting by a large group of little kids catching up to us, who start running and jumping around, like a one large mass of cheer, joy and giggle.
Suddenly I start feeling I have to be extra careful now, as to not step on any of the little ones, they seem to be everywhere, all around us. I start thinking they just need something to do, need some entertainments. So with her permission, I start "weaving" in to existence a playground, with slides and other stuff. For the little ones. Which turned out to be pretty challenging, because they all wanted to jump and climb on to everything before anything was finished. Even as she tried to calm them down, asking them to wait, it was all pointless.
Eventually I finished, more or less. At least it seemed like good enough to keep them busy for a while. So I could continue exploring, both the place and the person before me. But as we restarted our stroll and our conversation, I began noticing something unusual, whenever my companions focus shifted away from me, every now and then, it seemed like her mind momentarily disappear to some place elsewhere, while leaving the body standing frozen before me. Just for a moment. And then in a blink it's all back to normal.
At first I thought it just my own mind glitching. I'm in unfamiliar place and so on, and it's perfectly natural that there might be some things around that simply not quite in sync with my own awareness, or smth. But then one time she took longer than just a moment to come back. And as I focused more on her, I start seeing her "body", her "presence" slowly melting in to environment. Until I wasn't entirely sure what I was seeing, a person or a part of a landscape. And then it hit me.. Right at that moment she came back again, so I looked at her and asked:
"Are you.. Are you, the whole of you - this entire place?"
She only smiled, and the next moment I start feeling ground under my feet moving, waving, but very gently. Only then I actually looked around and actually saw, that all as far as I can see, all was alive, I am standing on the back of a being I cannot even see the end of. Every island is just one bump on the back of a titan.
I was so dumbstruck, I had to say goodbye for the time being and go back home to digest that experience properly. 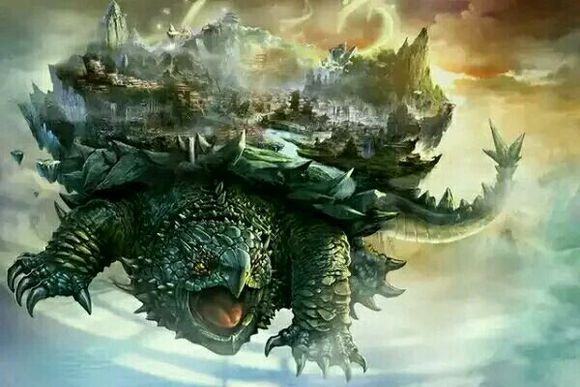 Not visually accurate picture, but pretty close on the vibe.

Re: Astral kaleidoscope: Afternoon with a Titan

When I think of someone being both the person and the landscape at once, I would normally just assume they've "assertively grounded", uh... sort of 'taken ahold the landscape'. For some a reflex, if they feel a desire or need for more energetic "oomf" or more situational control. It's a lot like the more passive sort of grounding, but um, not so passive. So instead of the person seeming like an extension of the landscape, the landscape seems like an extension of the person. There's a scene from the movie Inception which comes to mind.
Top
Post Reply
2 posts • Page 1 of 1