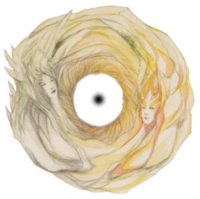 First two short stories, then a couple questions, to anyone who wishes to indulge me.


When I was younger, I was taken by my foster parents to a Hypnotherapist. I'm not sure the original intent in doing this was (probably to help with my insomnia), but the women who would be to hypnotize me was a trusted friend of the family, and even I had become quite acquainted with her, through her babysitting me a few times (I was indeed quite young.)

I learned very quickly that I did not possess the capabilities to be hypnotized. I got extremely relaxed, my body was jello, but my mind was racing, and I know I was lucid and making conscious choices in my replies. I'm not sure if my therapist knew that I was faking it.

One of the earliest journeys she took me on was to find my spirit guide in the astral wilderness. Everything she was telling me to visualize, I did, but it was all consciously, and I even had to stop a few times to think up what I was going to say next in reply to her questions.
I made up an animal to be my spirit guide, using the first animal that came to mind, that happened to look pretty. In fact, my foster parents probably had a poster of this animal in the house somewhere, that I subconsciously pulled up.

Since that day, I knew I wouldn't recognize my spirit guide, even if it did decide to come to me without seeking it out. (at least, one of my guides.)
I can honestly say that the only useful thing I came away with from that experience was the knowledge that I could remain lucid even at such a young age, and while being hypnotized (willingly, I might add. I agreed to go there and try it out.)


A while back, my girlfriend brought home a young stray cat she found running down the side of the road. She opened her door, and the cat hopped right in her car.
She brought it home to me, and I had to catsit it for a short while, while my girlfriend finished some personal business around town. Now, we're not allowed to have pets in our apartment, so we knew we couldn't keep it. She ended up giving it to her father, but that's a later part.

It was only at our house for two days and a night, but in that time, we grew extremely attached to that cat.
First, we learned that we couldn't leave it alone. At all. If we stepped outside the room, or locked it anywhere, it would start meowing so loud, you could hear it echo through every apartment in the complex.
If a single person stayed in the room with it, it was perfectly fine, didn't cry at all, and simply explored or relaxed.

We wanted to leave it inside, in case it decided to run in the road while we were outside having our cigarettes. The cat just wouldn't allow it.
So, we did what we could, and let it follow us outside.
It was seriously better behaved than any dog I've ever met.
The cat just sat next to our feet the entire time. Occasionally, she'd go out in the yard, look at the edges of our small property, and then run back up our porch to our feet or laps again. It was beautiful.

I seriously would have carried that cat on my shoulder like a fucking pirate parrot. No joke.

It would have made the perfect town companion. It even walked with us down the road and out to our car with absolutely no problem. I would have trusted her to walk with me around town without running off.
I seriously loved that damn cat.

We ended up bringing the cat to my girlfriends fathers house. He had been sad and lonely since my girlfriend moved out, and he kept losing his house pets (my girlfriends cat passed shortly before she moved out of her dads, and the cat he got after that ran away, but it was old and adopted. Probably didn't like it there.)

Now, all of his cats have been outside cats. However, this guy works for a train yard, so he literally has no free time. What time he does have, he spends getting drunk, as most lonely older men do.
While he was at work, the cat was either locked inside alone for anywhere from 8-32 hours (considering the fact he went out of state for work, and had to sleep in hotels,) or it was simply outside for that time. This is a fact that highly upsets me.

Within two months of the cat living there, it was pregnant. Within another month after that, it stopped coming back to the house.

I will always regret the loss of that animal in my life. That, however, is not the point of this story.

For a very short time (roughly 15 seconds, give or take a few), I shapeshifted into a cat, and was able to play with our new friend on her level. She (the cat) was sitting on the floor facing me, I was laying down there facing her, and I slipped into a trance, momentarily feeling my body transform, feeling like I wanted to pounce (so I did, right at her), and as she jumped at me, I was knocked out of it. However, this is the beautiful experience that led me to know that I needed this animal in my life.
I'd like to do that again, but shapeshifting is hard to do intentionally. In fact, I'm like 99% sure the cat is actually the one who induced my trance.


Anyway, on to the matters at hand. How would I know, given my prior experiences, if I'm meeting one of my animal guides?
I've never really felt that "telepathic connection" that people talk about when you find your guide. Not even with my own bearded dragon.
I mean, I can understand him, but it's more of a general understanding rather than a telepathic one. Like, he gets I'm doing humans stuff. I get he's doing dragons stuff. You know. He's honestly a bit dumb, but he's old too, so I give him the benefit of the doubt. I can sense his general emotions, but it's so primal and carnal, there's very little "thought" there. It's just urges, mostly. Occasionally I see a glint in his eye like he just became a bit more enlightened. Which is cool, and good for his species and him, but doesn't really strengthen our communication any.
Other than the one time with the cat that is forever lost, I've never known any more powerful feeling than simple understanding, which I have with a number of entities. Shit, I talked to a box of Q-Tips once. They're funny little dudes. It's not really anything "special."
I understand that meeting your guide will feel much different.


Also, I've recently been reading about familiar spirits as well (seriously, rather than for a hobby.) I understand the basics of creating a contract with an animal, but how can you know if an animal is willing to offer those kinds of services?
For instance, I have a stray cat sort of living on my back porch right now. We provide it with food and drink, as well as a small box and blankets protected from the wind and rain. It's also been relaxed enough to hesitantly attempt to come inside, when I hold the door open for it. She's come right to the door and grabbed some food, hung out a sec, then jogged back to the porch entrance.
She's jittery, but she hangs around, and has been doing so a lot more since we put a box out there to protect her from the cold.

I have a strong inclination that this animal might be willing to offer its services to me, especially in regards for all the benefits we give it. Most familiar spirits work off of mutually-beneficial relationships as it is, and I'm not actually getting any benefits. I feel used. All I ever wanted was some pets. (like, to pet an animal [its fur], not to own the animal as a house pet.)
Again though, I don't have any type of strong telepathic connection to it, like, at all. In fact, sometimes I can't even tell what's going on in that cats mind. It seems to have the attention span of a kitten, but it's an adult cat (has been pregnant once), and seems to be relatively smart overall. She's also very quick on her feet, and at making exits.


Does anyone here have experience working directly with animals in their magick? Any resources worthy of mention, beyond the basic stuff that comes up on google with "Animal Magick?"
Thank you once again for your time.


I'm thinking about getting a dog.
.
.
.
"God is an imprecise name for the only thing in the universe that actually exists."
.
Tell me what you know about darkness, and I will tell you about the light.
.
.
Selected Contributions;
Planetary Associations of Common Intoxicants
The Mysteries of Death

Animal magick! Dogs are fire-type in general, and cats are water-types. I believe rabbits are earth-type.. and I can't remember what the air type animal is but they're definitely not birds. Well we all know cats are extremely sinister and intelligent and they've been associated as familiars to witchcraft. I've a "spirit animal" in the form of my girlfriend's cat, although she says that cat's son, which also lives with her, has more of my personality. It's funny because I've only ever raised dogs and rabbits. Pets are family members, not "owned" like you can dominate an animal like a cow or a sheep for example.

Shapeshifting.. that reminds me of Candy Ray's recollections as an Egyptian cat.

Either way I've never even considered using animals with my magick. I couldn't have confirmation of their consent to do so, anyway.
on hiatus. contact via elsewhere.
Top
Post Reply
2 posts • Page 1 of 1