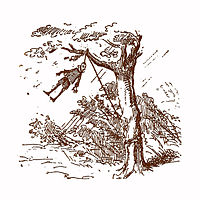 
there are no strings on me...
Top

I have heard some men try saying that to their nether regions , before they try viagra... [thumbup]
Top

"The Path itself starts with the Witchcraft Initiation: Initiation through Spindle, gaining the Inner Demon Familiar and protection from Patron Demon.

The beginner starts learning the simpliest rites, preparing the Black Icons, working on Witches’ Vision, preparing basic Tools of Witchcraft, then he undergoes the Cemetery Initiation, gives oath to Queen Death and receives permission to work in Her Domains. After that witch learns basic cemetery rites.

After it is done, witch must establish the contact with Abara, Church Demon, and undergo the Church Initiation. After that witch learns various church rites and might make a Pact with Abara.

Working on different Places of Power, witch must undergo the special Initiation in the form of Great Empowerment – receiving the Witchcraft Mark. Witch learns various advanced rites and might make Pact with Mafava or Pact with Aspid.

Witch needs the help of the Guide, the Elder Witch, to proceed further on this Path. The Guide might transmit a part of Their Power to the witch, which will multiply her abilities. Witch starts practicing Cult Demonic Rites.

After that witch must receive the second Demon Familiar, the Outer Familiar. She must address Satana and ask His permission to gain another Familiar. If He gives His blessing to do that, witch undergoes another Initiation. Second Familiar increases witch’s power significantly but second Familiar requires special Feeding.

Entering the Circle of Irodiana and gaining the rank of Black Elite, receiving the third Familiar. Witch reaches the peaks of Witchcraft and starts making Hell Icons, the Dreaded Artifacts of Power, which serve as Portals to Hell, which can be used to interact with Demons and empower all rites, but it requires a great responsibility, a simple mistake might end witch’s life. Witch learns Hell Iconocraft. Mysteries of Sabbath are also open for witch, and witch learns the ultimate love, curse, protection and other spells."

That's from one of the books of Anais Besova, from her overview of Russian Tradition.
Top
Post Reply
3 posts • Page 1 of 1