"Am I going crazy?" Entity contact and mental illness 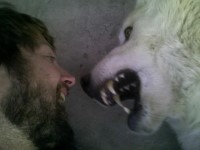 cyberdemon wrote:I agree with pretty much everything you've pointed out here, spiral. When you say "schism in the energetic body", that's pretty interesting to me. On this side of chao-ceremonia-demonology I normally assume that when we open/close portals that these portals just exist somewhere nearby, not exactly on the mage's astral or physical body.. But now that you've brought it up, the idea makes sense to me. Creating a portal directly on the astral body would definitely give a path for other beings right from the astral or higher planes and into .. not our physical world specifically, but at least up to the physical body.

Well, I basically had an "ah ha!" moment, I guess.

Yes, totally! And these schisms aren't always deliberately created, although knowing how to open and close them is essential to both healing and harming others through magic. They can also be opened through abuse, trauma, mental illness (especially the fragmentation of the ego during a psychotic break), bad luck while dabbling, bad drug trips etc. Any number of circumstances can leave people energetically damaged and vulnerable to influence. And lots of different "things" are attracted to the wound like sharks to blood. Organized religion would categorize all of these things as evil or sinister, but most are just out there trying to survive like us.

As for a mage deliberately creating portals on their energetic body to use in demonology...dang. That sounds interesting but really heavy. You could probably expound on the possible effects better than I could since I've never worked with demons.

I have been tossed into the deep end of the demonic pool.

I was "Given over to the devil" and allowed demonic free access to my spiritual body, whereupon they reconfigured and consumed me/ a portion of me. If you want it drawn out, youtube the video "Korean artist hell" and look for the twisted up people being tortured, that's what it feels like in the spirit.

However, recently I was given visions and allowed to connect with one of the creatures down there, one who is responsible for much of my pain in this realm, and it turns out she was once my wife- and has the other half of my heart. She is down there, possibly in part, due to my lack of love and appreciation for her in the first realm (I did not have Gods love for her, but I do here!) and this is my karmic debt to her, being carried out.

So where does that leave me- I would like to be healed, but I believe God told me, "Your healing is up to her" meaning I have to win her heart, or possibly just give it time and let God do it.

Anyway, before these visions, as I jumped into the spirit realm, in order for me to be able to "Hold" this deep information, God had to "Expand" my mind to hold it, and it literally felt like I was going insane the few times it was expanded.

So anyway I guess that's where I am at, desperately seeking answers. God (Or whatever concerned entity, force, or motivation) has allowed me to see the physical form of Ms. Asrael, and she is as beautiful as she is terrifying, her head is like the head of a bear, her muzzle is very large, and she has insane power to cause physical damage to flesh.

Like a woman scorned, but with teeth. The times I have been allowed to speak with her, she was sarcastic, bitter, and accusatory. She has also reverted to a sort of angry teenage attitude over things- though I do not attempt to communicate with her often. (She is very mad at me, hopefully less so with time)

I am trying to sort things out, here- why am I on this planet? Is it to satisfy a great karmic debt to Ms. Asrael and the universe? What should I do, how should I do it and when, and what will be MY end? I feel like, if there is a God, he is saying, "Do not be afraid!" to me, but I am afraid. Still, I keep going.
Top

> I believe God told me, "Your healing is up to her"

So you may be a victim forever.

Alternatively you can heal yourself. It is quicker and more profound.

>The times I have been allowed to speak with her

Who allows you? What happened to free will?

>Is it to satisfy a great karmic debt to Ms. Asrael and the universe? What should I do,

Since our God is a God of love, the practice of love is the quickest way out of karma.

Fill yourself with the love that flows from the Flame in the heart.
Top

>So you may be a victim forever.

Correct. I have assumed this. As I accept it, truth is free to tell me, "This is where you are wrong." but if I flee from it in fear it remains a constant vexation.

>Alternatively you can heal yourself. It is quicker and more profound.

Do I have permission from her heart to seek healing? I felt some healing begin recently, but I shooed it away, as I reached out to Ms. Asrael to ask her if it was okay (Some times she says "yes" but she's still not happy with the whole thing- I changed her world just like she has changed mine

>Who allows you? What happened to free will?

Some times she is angry and doesn't want to talk. She tells me to "Shut up" so I stop talking. Not because I am afraid of her, because I want her to have her free will without me influencing her.

>Since our God is a God of love, the practice of love is the quickest way out of karma.

OK. I like this. How do I love her? Embrace the Godly love of her every facet? The one I was born with? What does that look like... An altar to her? Poems to her... I have written novels about her...

>Fill yourself with the love that flows from the Flame in the heart.

This sounds good, any advice on how to do this?
Top

This is all you need