Do you know, around this time, 18 years ago on September Occult forum was born?
We finally reached legal age for all kinds of fun things.

To commemorate such occasion I felt like digging some old records, because it's history worth remembering, and because I had no better use of my time today. And what a story it was..
Note: All dates are in international format defined by ISO8601 (YYYY-MM-DD) and sources used for following research: web.archive.org, lookup.icann.org and Occult Forum Archive.

2002-09-04 On this day forum domain was registered, so I've decided to use it as a official birthday date. The very first incarnation of it had slightly different domain name - occultforums.com, but that's where it all started, as far as I'm aware. There aren't any records left, at least non that I could find, to tell us on which day exactly forum it self went live, but must have been soon after, within days. Because the earliest snapshot available on internet archive database dates back to 2002-09-25, which is only about 3 weeks after domain registration, and by then forum was up and running, with a little under 100 users and 600 posts. Very humble beginnings, but it didn't take long for it to pick up. Those days were full of childish wonder and curiosity, even admins were very relaxed, so much so that nobody was doing any forum backups back then, nobody expected for it to grow as much as it did, nor that the entire place might hit some problems down the road.
2003-09-20 Only one year later forum was buzzing with life. On September 20th, roughly 12 months after it's birth forum had total of 66'000 posts and around 2700 registered users, which is not too shabby.
2004-05-22 It reached it's peak, at least in it's original form, by the end of May, only few months shy of it's second birthday forum hit nearly 180'000 posts and almost 7000 registered users. No one was prepared for for what was to come next..

2004-05-24 On that day people users trying to reach forum were presented with the message from admin, informing everyone of some severe "technical difficulties".. 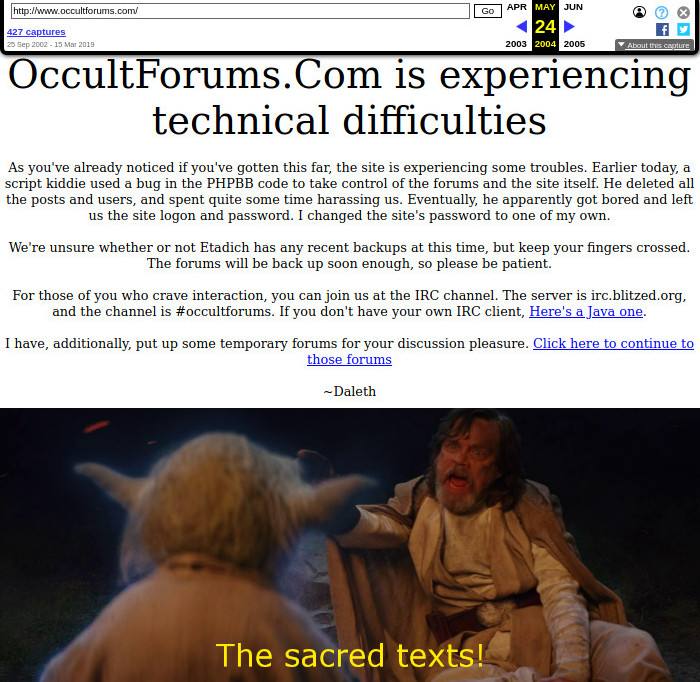 Entire forum was gone, while they were hoping to scrape up some backups, it didn't happen. All had to start pretty much from zero. Almost two years of work, close to 200'000 posts were lost forever, never to be seen again.
Once forum was up and running again, in about two weeks it reached almost 10'000 posts from over 500 users.. Only for it all to be nuked again.
It had to pull it self back from zero second time, and it was doing alright for entire month. Reaching 20'000 posts from 1000 users on 2004-07-13, a little over 1 month since the second crash.
But twice was not enough. The very next day admins were picking pieces for the third time, but there were no pieces to pick, there were no backups even after the third time. Or at least my records don't show any signs of data retention of any kind, everything had to start from zero up to that point.

2004-07-15 The earliest posts that I can find on Occult Forum Archive are dated July 15th, 2004. Which indicates that everything before that date was more or less completely lost, and only from that point on backups became available. Which allowed us to preserve records from at least the last 16 years, at least most of it. As we will learn, forum did experience "destructive technical difficulties" few more times over the years, with partial loss of records, but non so far resulted in complete 100% loss of everything. (*knock the wood three times*)
2004-09-02 : On the eve of it's second birthday forum was coming close to 30'000 posts and 1600 members. While previous few months were quite devastating, non of it had any significant negative effect on the community, and activity on the forum. It was growing at the same rate if not faster, than before those horrible months of summer.
2005-09-26 Forums third birthday was marked with nearly 180'000 posts and 6500 registered users, reaching previous all time high - 200k posts only few months later, by the end of December same year.
2006-07-21 Following year forum had records numbers, on July peaking at 270'000 posts and close to 10'000 registered users, 2000 of which were active. And only 3 months prior, on April 24th, forum hit record of "Most users ever online" at 1300. Life seemed to be going well.
2006-08-26 Forum went under once again, due to some technical difficulties. Admins temporarily set up some alternative forum for everyone, but it wasn't very smooth, all users had to re-register. 4th birthday came and passed during that prolonged time of forum trying to put it self back together. While forum wasn't quite it self until early next year - a good 5 months, it was still usable, and it was still growing, even though during that crash about 40% of all records were lost. A snapshot from November that year show forum down to only 157'000 posts and 8700 users But at least it was not from zero.
2007-02-02 Forum seems to be back to normal. No more redirecting. Reaching 200'000 posts and 7200 users. It fairly quickly regained it's activity, having fairly constant daily 600-800 active users all throughout the 2007 and 2008 (at least I think that metric shows daily active users). While it wasn't growing as rapidly as before, it was very active and accumulating post and users constantly.
2008-12-24 By the end of that year, being only 4 years old, forum had 345'000 posts and 12'000 registered members, with daily active users coming close to 1000. Unfortunately Christmas of 2008 were the last for occultforums.com.
2009-01-02 A snapshot only about one week later tells us forum's hosting account was suspended:

Which had devastating effect on the community, because there were no signs of recovery. After couple months, eventually everybody assumed all was lost and gone, for good this time. People simply moved on to other places, to other communities.

2009-03-09 To everyone's surprise someone managed to get their hands on the database of the old forum. And they managed to revive it, under new name, the one we all know now and love - occultforum.org. Recovered database was not complete, without user list, and only about 80% previous posts. Snapshot from March of 2009 and show forum having close to 290'000 posts and only 23 registered users.
But unfortunately life didn't come to it's previous level, the forum remained, while somewhat active with handful most loyal members, yet fairly stagnant for the next few years, only around 2012-2013 picking up a little, but only marginally. And so it stayed as a quiet and peaceful place for 10 years, until we lost it again on 2019. During those very last years forum was experiencing multiple downtimes, sometimes lasting for few days, and there were no admins in sight most of the time. It got deserted by everyone, both members and it's caretakers, so it came to no one's surprise when sometime at the end of 2019 it just simply disappeared. Which was a terribly sad day, whichever day that was..

2020-05-06 And here we are now, after few months of darkness, borealis acquired forum's database and restored it exactly as it was (almost). And now, while we're celebrating our 18th birthday, we are still a quiet place, but we are alive. With 359'000 total posts, and 10'000 members as of 2020-09-17, we might have a bit fewer members than previous highest, but number of post is all time high.
I really should make a copy of it, someday, in case my best buddy Occult Forum Archive gonna go offline again.
And just for final touch, I made a graph of Occult Forum's total posts count over the period of 18 years, just for fun. It should be reasonably accurate, error margin shouldn't be more than few percent here and there.
My data shows we are doing fine.