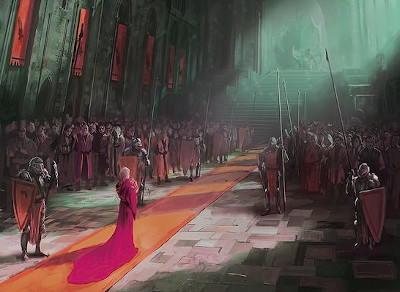 ..
Throne room of the royal palace was buzzing with nobles and other officials. All hastily assembled today from all corners of realm. Rumours must have travelled on wings of falcons to get them all here just in time.
"Your mother has arrived, Your Highness!" - The grand vizier announced from the far end of the hall.
There we go. My own mother chose to challenge me and my position. Unthinkable. And to do that in the presence of the entire realm? My disappointment is immeasurable.
The hall was drowning in the sea of whispers and rumours. Right until the moment doors opened and she stepped in, with her entourage. The entire delegation marched the red carpet all the way to the throne, without skipping a beat, stopping only a dozen feet in front of me. The hall went dead silent.
"Son.." - She greeted me casually, staring me dead in the eye.
"Mother.." - I replied a moment later.
She was just standing there silent for a good minute. To built up some tension, some grandiose, no doubt. Everything always have to be on her accord, on her tempo, and extra dramatic. When she finally felt ready, she raised her right hand, pointing directly at me.
"Son, I shall cook dinner for you today!" - She announced it so soundly, every single jaw dropped for a mile around.
"How dare you?!" - I jumped out of my throne. "I've been cooking my own meals since the day I could stand on my own two feet. The only person that was, is and will be cooking my meals - is me! ME!" - I was banging my own chest.
"You are forcing my hand, son. If you refuse to step down, you leave me no other choice, but to challenge you in a duel." - Her mind was deadlocked.
"As you wish, mother." - I start walking down towards her, refusing to back down.
Everybody surrounded both of us in to a ring of fire. And we began to battle. "Battle of wills" as they call it. An ancient ritual, slightly similar to "rock, paper, scissors", but with more combat variations and more rules. And so, round after round my hand gestures would beat hers, just to loose on the next round, and then win again. We are evenly matched, almost. Because to no ones great surprise, at least not to mines, I eventually got her cornered and she ran out of tricks up her sleeve. I've won! The crowd was cheering for me, and I must admit, I felt quite pleased with my self.
"Very well, son, you won this time. It shall be as you wish." - She can barely hide her disappointment.
"Thank you, mother. You fought well." - I tried not rub too much salt in her wounds.
"But you know, it's not over. I will be back tomorrow, same time, same place." - She muttered, while marching for the exit.
"I wouldn't expect it any other way, Mother. Enjoy the rest of your day." - I released a breath of relief.

Return to “Dreams and The Unconscious”