Thanks to all who help!
Top

Then maybe don't shout but whisper it and gradually imagine it getting louder and more intense in your head, although physically you are only whispering.
Awake from sleep! Remember you're the son of a Great King, see to whom you're enslaved!
Top 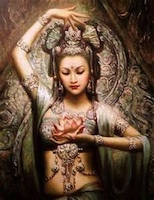 I usually "vibrate" spells through a technique I learned from chanting mantras. You let the words or names rumble up from your innermost core and ripple through your physical and energetic body and then pour out of your mouth when you can't contain them any longer. And you can do this internally or externally.
"Follow the path of the radiant life force as she flashes upward like lightning through your body." - Vijanabhairava Tantra
Top

Thanks to all who help!

In early Scandinavian magic there are accounts of spells being sung or screamed very loudly and with a high pitched voices.
However towards the end of the 18th century and onward, most magic was performed in absolute silence. Some of those that went to the old healers said that they could sometimes here them mutter words underneath their breath but never loud enough to be heard or understood.

In most religions around the world spells, prayer and curses are said out loud, except for the original christianity that always prayed silently and in private.
So if you believe that the gods have to hear your voice then by all means speak the spell out loud, but if you think the gods can read your mind, then you can pray or cast spells in silence.

It also depends on the particular spells. if your doing a spell that involves spirits than it should probably be spoken out loud, and if you are doing a spell that is more geared towards energy work or psychological means, than you can do it in your head.

However, if the spell specifically mentions that it has to be performed that way, then yes, you should perform it the way that it is written.
Always try and break down the spell into smaller pieces and analyze why the spell is written that way and what it is trying to achieve. If the spell calls for a soft sound growing louder and louder as a crescendo, it is probably meant for you to reach a higher level of ecstasy. So now you have to ask yourself: Can you achieve the same heighten emotional response by just saying it in your head, or do you need to shout it out loud to get that effect?
Think about your own level of energy, mental state, vibration and body language. Do you need to do something to get the reacting out of yourself that you are trying to get, or can you do it with smaller movements. Is brushing your teeth in your head the same as brushing your teeth in real life? What makes them two different, and what do you need to do to translate the physical action into a mental one, OR do you perhaps really need the physical action to correspond to what you are trying to achieve?

Don't practice magic in your own home, that's just asking for trouble. Go and find some place where you can be alone and private.
Beginners Book List
http://www.occultforum.org/forum/viewto ... =2&t=39045

You need to speak for your intentions to be known
Top

inMalkuth wrote:You need to speak for your intentions to be known

Well, that depends. Mainly on what you are doing as well as your skill level and a few other things. Ritual based magicks, especially invoking/evoking ones, benefit greatly by spoken words, chants, etc. Energy based and direct/hands on magicks, well, those can be done in complete silence, or atleast with strongly projected thought.
Time is but an illusion in perception and is only perceived to pass by at the same moments together for us all... which is, quite frankly, me saying to not expect from me in a timely manner!
-I am but a simple wanderer... Though I may be gone for immeasurable time, always do I return.
Top
Post Reply
6 posts • Page 1 of 1