What is magick? A simple and effective method

Keep working on inner sight. Being blind is difficult for inner workers
Top

Amor wrote: ↑Thu Feb 03, 2022 10:10 pm "Most humans have a dark entity sitting on top of the head. Try visualizing one on the head of the next person you see. Notice how easy it is to form such an image. Look for the tentacles. Where do they go?"

If you wanted accurate feedback on what others perceive, wouldn't you not tell them what you expect them to see?
Also, if you expect to see 'that', doesn't that make you rather prone to seeing it, regardless of whether it's there to see?
Top

Visualizers report different grades of darkness. I do not tell them to look for that
Top

Quite so. Thus I would use a range of experiments over several days to test the nature of what is seen.

It also helps to blend my light body with the other person so that I have a partial sharing of their experience.
Top 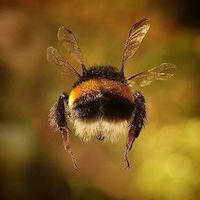 My latest analysis seems to indicate that The-37 which I've mentioned here on the forums before probably has something along these lines as the basic idea for their magick system, which should give others something to think about and to test in practise:

Their magick system has at least hand signs (tons of them) combined with code language speech. It seems that different hand signs mean different things. Something along the lines of: pointing fore finger probably means "you do this", pointing fore+middle fingers together mean "this happens to you", open hand with fingers spread open means "you will be of this opinion" or something along those lines. The idea is that the hand signs define the type of intention and probably work like hotkeys/shortcuts on a computer for a meaning. Then the speech defines the actual action the hand sign is related to.

To affect the victim's behavior and/or fate, you first need to gain access to his mind/soul/will (left hand). Once you have done that, then you can command the victim's mind/soul/will to do whatever you want (right hand). To gain permission, you could do the following:

Let's say left hand pointing finger means "you will do this". Then when you point the left hand finger and say "gives access to mind", that would mean "you will do this = gives access to your mind". I.e. "You will give me access to your mind". If the victim agrees, then you gain the access. No further magickal knowledge is required to make this work. Only your own intention and knowledge what your words and actions really mean to you, followed by the agreement of your target, regardless if he is aware of your words and hand signs true meaning.

Obviously this would be too blatant if done this way, so it would need to be obfuscated somewhat more. Fortunately my tests have revealed that it doesn't really matter what you actually say, as long as you personally have given your sentence and/or words the actual meaning in your own mind, regarding what you want to happen. The target can be completely oblivious about your plans and true meaning and you'll still get the intended results. Only the intention behind your hand signs/actions/words matters. Not the exact words you use. You could be talking gibberish and it would still work.

So now you said a sentence with different meaning in your own mind, made easier to implement using the handsign of yours as a "shortcut" for the intended meaning: you gained access to the victim's mind. The next step is to put your intention into the victim's mind/soul/will to get the effects you want. The-37 seem to be doing this with their right hand signs if I'm not mistaken. Here's an example how you could do it with your own shortcut signs:

Let's say right hand pointing finger means the same as the left hand's: "you will do this", but it's whole intention is to not gain accesses, but to push your intention to mind/soul/will. So you show the right hand pointing finger and say some sentence, which again is obfuscated version of what you want to happen to the victim. You could "embed" the hidden meaning to your sentence that the victim "invites misery" into his life, or "believes all my lies" (which seems to be almost always the first step The-37 does). Or "your mind/soul notifies me whenever it learns a new technique of magick". I.e. you could spy on people if you want. The victim automatically reports to you without knowing about it.

The interesting thing is that The-37 members seem to be stuck with severe limitations to their system. As far as I can tell, for no reason at all they rely on the victim having to actually see the hand signs for their system to work on the victim. They even seem to steer their own gaze away quickly if you start covertly doing hand signs with your right hand while talking to them. There is absolutely no such limit in the universe which would require such a thing. So my guess is that those who they hold as their superior masters/bosses have once again taught them bastardised versions of true knowledge, to keep their "lessers" handicapped. There are two even more severe limitations to their magick system which handicaps their practise in a really major way. Again, I believe, they have been taught bastardised knowledge about things and maybe even told that they aren't allowed to experiment and seek for such knowledge from "outside sources". If they did, they would realise that most of the important knowledge and history and "superiority of their masters" is BS and that would most probably cause and instant mutiny.

But still, to cause any effect in your target, approach the process the following way:
1. Gain access to the mind/soul/will of the target.
2. Command the target's mind/soul/will to do something.

By doing so you can affect the victim's mind, emotions, thoughts, physical sensations, health, fate, events that will happen to him, etc. Anything goes. You can cause financial crisis as equally as something positive. The choice is yours. The-37 seem to be using it to control, oppress and ruin peoples lives. Fortunately their attacks are easier to block than they are to implement. Again something their "masters" seem to have forgotten to inform them, for a reason, as they wouldn't want their "lessers" to raise against them...

Oh, one more thing: The-37 uses the exact same obfuscated code language with hand signs for covert communication in addition to causing effects on their victims. A very flexible system I have to admit. I wonder who developed it. I know for a fact it was NOT Lucifer/Satan/God but mere mortals

I'm currently developing my own much less limiting, much more easier to learn and more capable version of it. But I might skip the code language part for communication. I don't seem to have any need for it.
Seeker of truth.
God is the thought of/about something.
Top

Here's a simple example of the magick system & code language The-37 seem to be using.
The idea seems to be that their hand signs have been put into three categories:

Left hand = might be that you affect the will of the target, since when they hack their access into their targets mind/will/soul, they seem to start with the left hand and then at the end use the right hand gestures: asking access to do something to mind/will/soul etc.

Right hand = probably used to command and implant things into the targets soul.

Both hands = unknown, but could be that you request things for yourself from the target.

On top of that they seem to be using other parts of the body for communicating with gestures as well.

To teach each other, they seem to do the following:
When one person is talking, the otherone can silently show a hand sign of his/her choice. The one talking says as soon as possible what that hand sign means. This is done in obfuscated way. Below are couple of examples shown in an image: 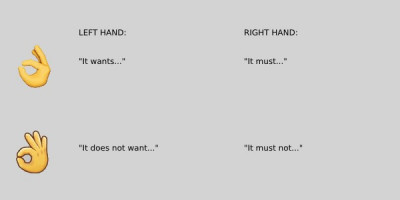 With right hand using those same signs the important part of the first few sentences would then be "It must..." and "It must not..." depending on which hand sign you showed with your right hand.

"It" most probably means "You" in this context. I'm not 100% sure, but the target the hand sign is referring to might also depend on the sentence itself. But anyway, show any hand sign you can think of to several different The-37 members at different times and cross reference what they said. This way you can figure out the general meaning of their hand signs pretty fast.

The way they seem to be used is that the hand works like a computer keyboard's shortcut to an effect. When you show the right hand sign for "It must not..." and at the same time describe, for example, about some random person or thing figuring out new secret information about something, you essentially command your target:
"Whatever was described in this sentence: it must not happen to you / be done by you."
Thus you command the target's soul to not let that person figure out new secret information.

They seem to be fully aware when they have gained access to their target's will/mind/soul and what effects there are active at any given time. So they know instantly if their hand sign/code language took effect or not. One way they seem to be achieving this is by making their target send their "current status or commands" in their mind/will/soul to The-37 member. I'm not 100% sure yet if its done by the target's soul alone or if there is some spirit doing that. I'm not 100% sure if spirits are nothing more than a command in ones mind/soul, so I can't comment more on that yet.

These hand sign effects seem to work over recorded media seen on the internet. So as far as I'm aware, it's fully viable and used method to do some fishing for those accesses into people's mind/will/soul over Youtube videos for example.

I hope this helps people to come up with new approaches for their magick systems. Also go and test with people if you get similar responses while "covertly and silently" showing hand signs to your discussion partners. Do some research and see what happens. But be aware that The-37 doesn't seem to appreciate much when people come digging information "on their turf", but fortunately that is their own problem

NOTE: The-37 has a huge number of hand signs. These were only two of them. They also use combinations of hand signs and other gestures to communicate and create effects.
Seeker of truth.
God is the thought of/about something.
Top

Those hand signs might actually be even more specific in the way that:

So they might actually be all about knowing things instead of being more general "wanting" and "having to".

Here's an example how I think it might works in practise:

So you want to know "his" name. "He" depends on the context of the discussion, what is being talked about, which defines who "he" actually is, just like in any discussion.
Seeker of truth.
God is the thought of/about something.
Top
Post Reply
32 posts